Cleaning up the mess created by Humanity guided by principles driving people apart and causing abuse, poverty and other violence.

Oh, what a mess Humanity has made of life on this planet!

Such a beautiful animal and plant life and such a disgusting treatment of Nature and humans by other humans that are supposed to be intelligent or that consider themselves to be superior and having the right to abuse people and Nature.

They clearly do not have a heart and a brain that can communicate heart-to-heart. Throughout history, many atrocities and abuses have been committed by people feeling superior and attributing themselves rights and privileges others were not entitled to. Or that allowed them to damage Nature.

Pedro’s “dream of Liberation” about Nature, Peace and the world today was indeed penetrating and revealing. It was about like a “clean-up” operation of all that was not functioning well in this world.

The images shown in the dream went very fast. They expressed anger and disgust. Pedro was shown all the problems affecting the quality of life of people, animals and plants on this planet.

Earth could indeed have looked different. After the dream’s “angry” part, came the “positive” part: how to clean-up the mess. During the brain clash, his brain processed huge amounts of information. It later came back in the form of inspirations Pedro discussed with us and other people from different backgrounds and countries around the world.

It led to the launching of the Natura Pax campaign for Peace and Justice and the creation of Danellandia – the World land of Peace.

Some say that AI will solve many of Humanity’s problems. It might well do if it is created to serve all of Humanity and not again, only some at the expense of so many others and of Nature. Abuse seems more than likely, unless the “Mind” is rehumanized, renaturalized or “summonized” (adapting it to be in line with Lex Mater of Natura Pax standards).

Indeed, AI may make it possible to eventually replace any body part. However, we cannot let AI take over humanity. AI has to be put at the service of all of Humanity and not be left unregulated and in the hands of people and companies that could exploit it. They may be very advanced as regards AI, but when their mind is overwhelmingly focused on making profits at any cost, even if it means damaging people and Nature, they are a danger and we should be protected against it.

If AI is introduced mainly to generate riches and power for some at the expense of many others and Nature, it should not be introduced at all. The abuse of money has led to the world of madness we live in today. It is run mainly by people addicted to power and riches. If AI is used to facilitate the abuse, we are entering a danger zone in which a large majority of people as well as Nature will be treated as a commodity to be traded, monetized and what not.

The many atrocities committed against people and Nature throughout history were committed by people deemed intelligent, but they actually were not. They did not have the right intelligence – the higher intelligence related to DNA+ or genuine humanity.

Society has come to accept violence as being part of the whole system – political, economic and all else. Many have come to see violence as a kind of entertainment. Violence exploited and monetized by the game and film industries. Real life already has a lot of violence. Why do we need to “play or game with it”?

Violence predominantly results from “primitive drives and urges” and a low level of HVE or human value equivalent. As the world has very often been run by people with a lower HVE, we do not have a world now high in humanity. It is largely run by people driven by money and power. It keeps Humanity from reaching a higher level of civilization. A civilization based on the principles presented in Natura Pax or New World Pact.

Violence exists in all sorts of forms. Poverty is also violence. Consequently, those being able to solve poverty but hardly caring about the children dying every day around the world because nobody genuinely cares about them, are acting primitively. They cannot communicate in WiSOP or heart-to-heart and have a low HVE.

Violence has had a profound impact on us since we were young. On some of us since we were small kids. We have always felt we did not belong in this world hit by so much violence in many different forms. We could not understand why people made war or why they left people living in poverty without food or any help.

We have always wanted to do something about it. Danellandia and its campaign for Peace and Justice was like a logical or natural consequence of that desire.

We met many people in different social classes, but the most impact on us was made by poor children we met in different countries and some of which we helped to have an education.

Some were so grateful and spontaneously asked us if they could call us dad or mum or said we were like parents or an older brother or sister to them.

All children deserve a happy life

Our dream it is to help all children and all adults living in poverty and distress to have the means to live a life that is worth being called life. Poverty should be tackled on a scale never seen in human history. The mindset of those having the means to tackle it, needs to be shaken and upgraded to a higher level of intelligence – called CIQ.

We call ourselves Ambassadors of Nature and Peace for a reason. We have felt very connected to Natura Mater and Peace and we dedicate a lot of our time and means to promoting human values.

We have seen injustice and violence first-hand and it has made us solemnly promise – speaking heart-to-heart to all wherever – that we will do all that we can to try and make sure that no child is left alone out in the cold – even if he or she lives in a hot climate.

We will make sure that no child is considered of less value than the director of the biggest banking group world-wide.

In WiSOP or the language of Peace we are not judged on what we own, but on what we do as a person of good will. We are judged on our level of HVE or of genuine humanity.

We hope we will be able to convince those that run our world but are still too blind to all the damage done to people and Nature because of a wrong mindset, to change and unite. Unite to create a world for all and for Nature. 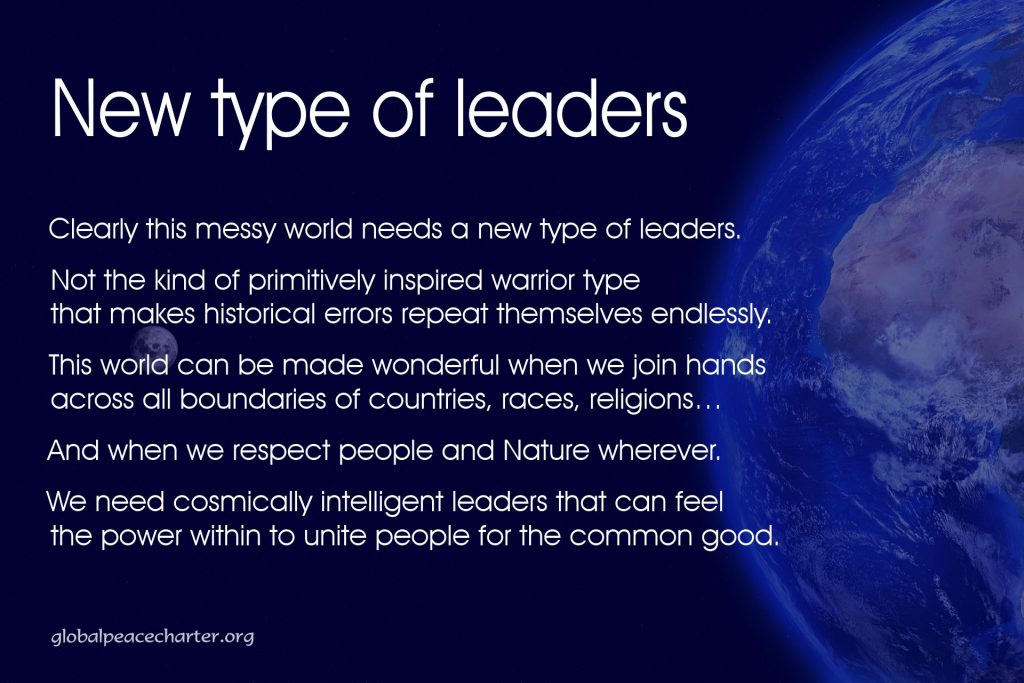