It should have been clear by now that this virus has been the result of the way this world is organized: it is a real mess! Cornucopia or plenty for a limited few and quite often modern slavery and misery for the rest. Nature maltreated and abused…

Who is to blame? Nobody should look for anybody in particular. Joining forces across all borders and walls and acting now are the top priorities! They should have been ages ago.

What we need is a new world!

All leaders – present and future – should realize this and join forces to make it happen. Borders and walls based on countries, races, religions, political or social systems, gender and financial status should no longer interfere with implementing this Global Peace Initiative based on boosting common human values! It is truly global and the only way to save Nature, Earth and its inhabitants.

The biggest mistake in human history has been to dissociate Nature or Natura Mater from the “Undefinable of Peace and Happiness” that has been given different names, like the Superior Intelligence or the Divine. In WiSOP speak we code-name it MPTA. Indeed, this mistake has made the invisible part too distant and the visible part abominably mistreated.

Praying to God, while neglecting and mistreating Nature is pure blasphemy. It has led to Nature being polluted to the point of making the entire planet ill and unhealthy for all that lives on it: plants, animals and humans (supposedly the most intelligent, yet the most destructive of all creatures because of a lack of “cosmic connectedness”).

Nature should be respected and treated as Humankind’s partner in all human activities.

Nature is a living entity and [I|S|H] does feel what Humankind does. Not so much on an individual level of a man or a woman in particular (there are exceptions), but as the offspring that is on the brink of destroying everything we need to be able to live a decent life: clean air, water and soil; healthy food; safety and human values that allow us to live in a society that cares for Nature and for every member of it.

The world that is heading for extinction or its end (if nothing drastically changes), is simply not what Nature and Humankind can survive much longer. May the leaders everywhere – also of the so-called great countries – have enough mental and cosmic capacities to understand.

The air, water and soil have become so polluted. Food is manipulated in a way that it upsets the whole human and natural chemistry.

Through politics so biased and selfish, society has imposed rules and values that are counterproductive: they create enormous inequalities, allowing some to bathe in gold, while others do not have enough food or basic medicines to survive.

This world cannot but change and rethink the way it treats Nature and people. It’s madness to want to continue the “damaging business as usual”. 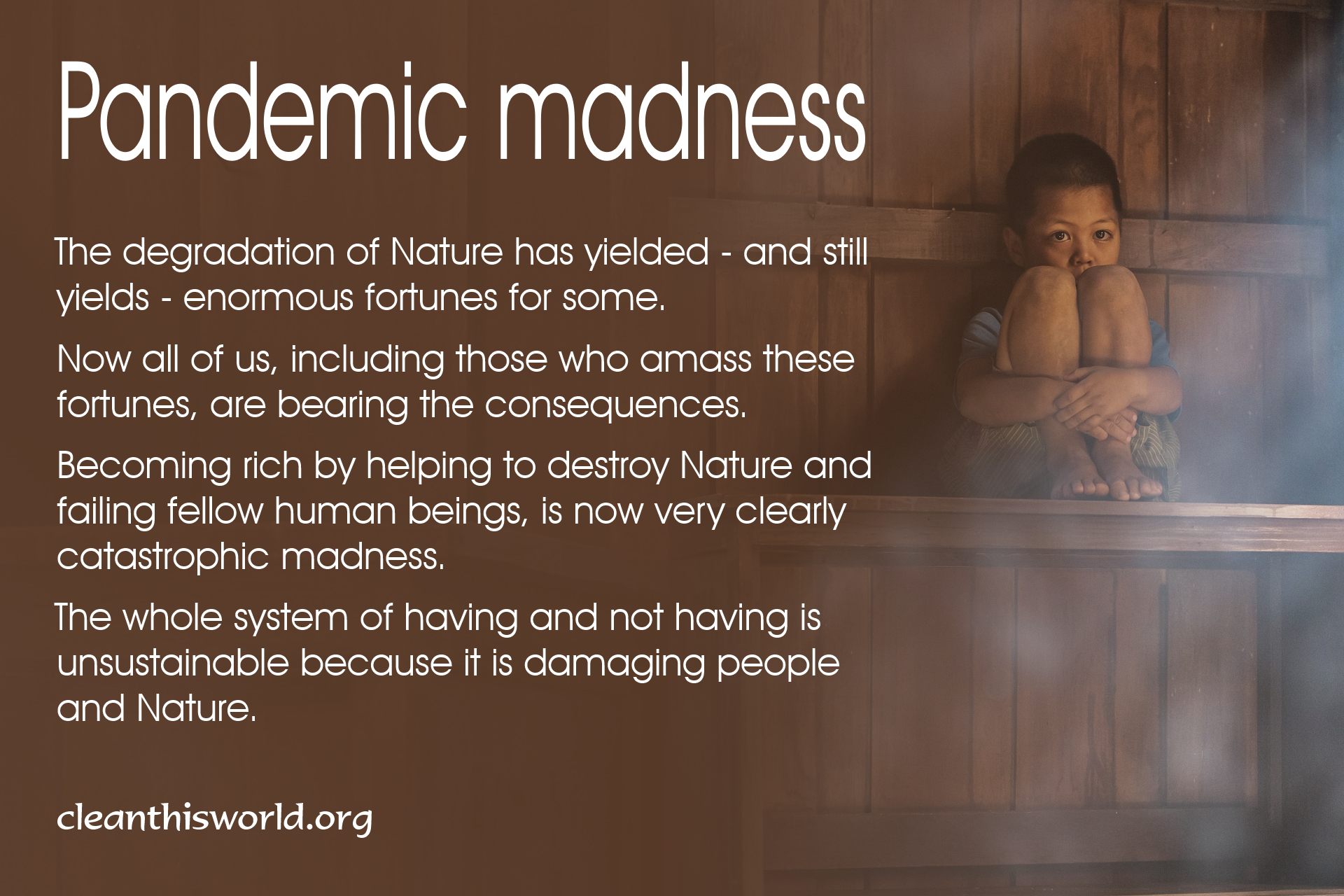