We are being traced and tracked and made into simple data used to algorithmetize and monetize us. Some insist on making us live in a virtual world. Madness and total addiction to the Golden Calf or money in whatever form.

We need the world to boost its sanity and common sense. All people are precious. Too precious to be treated as a commodity you can do anything with.

Lex Mater should be respected always and be the rule when no specific rule or law prohibits the kind of exploitation and abuse we are all victims of now.

Mega may sound nice and promising, but like artificial intelligence it might lead to mega abuse and disasters, unless the people behind the abuse are sanctioned and brought to their senses.

For a long time, we have felt that the type of blood-sucking marketing that is gaining ground would finally lead to a society where hardly anybody could trust anybody anymore. A very saddening and sickening prospect.

We feel we have reached the point where people have been made so dependent on and enslaved to the internet that, even though they feel they are being abused and manipulated, have no alternative but to continue and navigate on a sea of information they only partly need. Navigating on a sea without having a beacon to make you see the dangers should stop.

People are no commodity

People are not objects or a commodity you can manipulate the way you like. People are precious and this type of marketing that has come to “rule the waves” is simply disgusting and very primitive. At the same time, it reveals that those who “rule the waves” are not people we should look up to. We do not. When you speak WiSOP you see that transparency is missing and that it should be imposed. And when reading about how much money they earn while abusing people’s dignity and at the same time being looked up to, we feel something indescribable. WiSOP speakers can feel it too.

It is something similar to what our friend Pedro experienced in the weeks before his “brain clash” in 2004. His brain could no longer accept what we – and with us so many people in this world of madness – were forced to go through.

With hindsight, the “brain clash” has provided us with a new vision of this world of madness and it has shown us how to turn madness into goodness and how to reward people that deserve it. Those having the wrong values should not be allowed to continue to use us as objects or as a commodity to build fortunes on. As if among them they were having a competition about how many percentage points their net value would increase (well, that is material value).

Evidently, you can be worth billions. But if you do not have the right values or you breach the basic values any society needs to respect to be able to function properly, then your HVE (human value equivalent or your value as a human being) as we call it, can be very low indeed.

The only yardstick our “modern” society seems to use – ever more so – is money and since about a few years also the so-called bitcoins or cryptocurrencies. Cryptocurrencies for non-traceable transactions facilitating international crime.

Is this not pure madness, especially when you think about the so-called fiscal paradises where the fortunes made with dirty money can be kept safe? And out of sight of the masses of people that have been abused and manipulated or worse to allow a few to acquire those fortunes.

Will cryptocurrencies not make it easier still to abuse, manipulate and dominate others – already victims of capitalist abuse?

Well, sometimes we wish that everyone and especially those running our economies and dictating how we should live so as to provide just a limited few with the possibility to “live like God”, would have a “brain clash”.

They would look at themselves and at the world around them with a new view. Some of them would see that they are really not to be looked up to, even though they belong to the limited few and rank high on the list of the richest people in this world. Many of them would feel uneasy to show off their riches after having gone through the crash and having seen what really matters in life. They would have seen that money should not be a goal in itself, but a mere tool.

Nothing material can be as rewarding

WiSOP is clear about it. Money should only be used as a tool. When it is an aim in itself, it often becomes an addiction making you blind and deaf to your own higher needs and to those of other people and Nature.

WiSOP is the language of Peace and understanding it makes you see and feel that nothing material can be as rewarding as feeling connected with the essence of life.

Learning to speak WiSOP by trying to make the present world with its huge anti-values be replaced by a world of real values, makes you truly rich and more complete.

It has nothing to do with material riches. Nor with religion. But with the very essence of life (which we code-named MPTA) and with faith in goodness in all people and the need to bring it out. To the benefit of all. Also of those now addicted or blinded by the glitter of material riches. 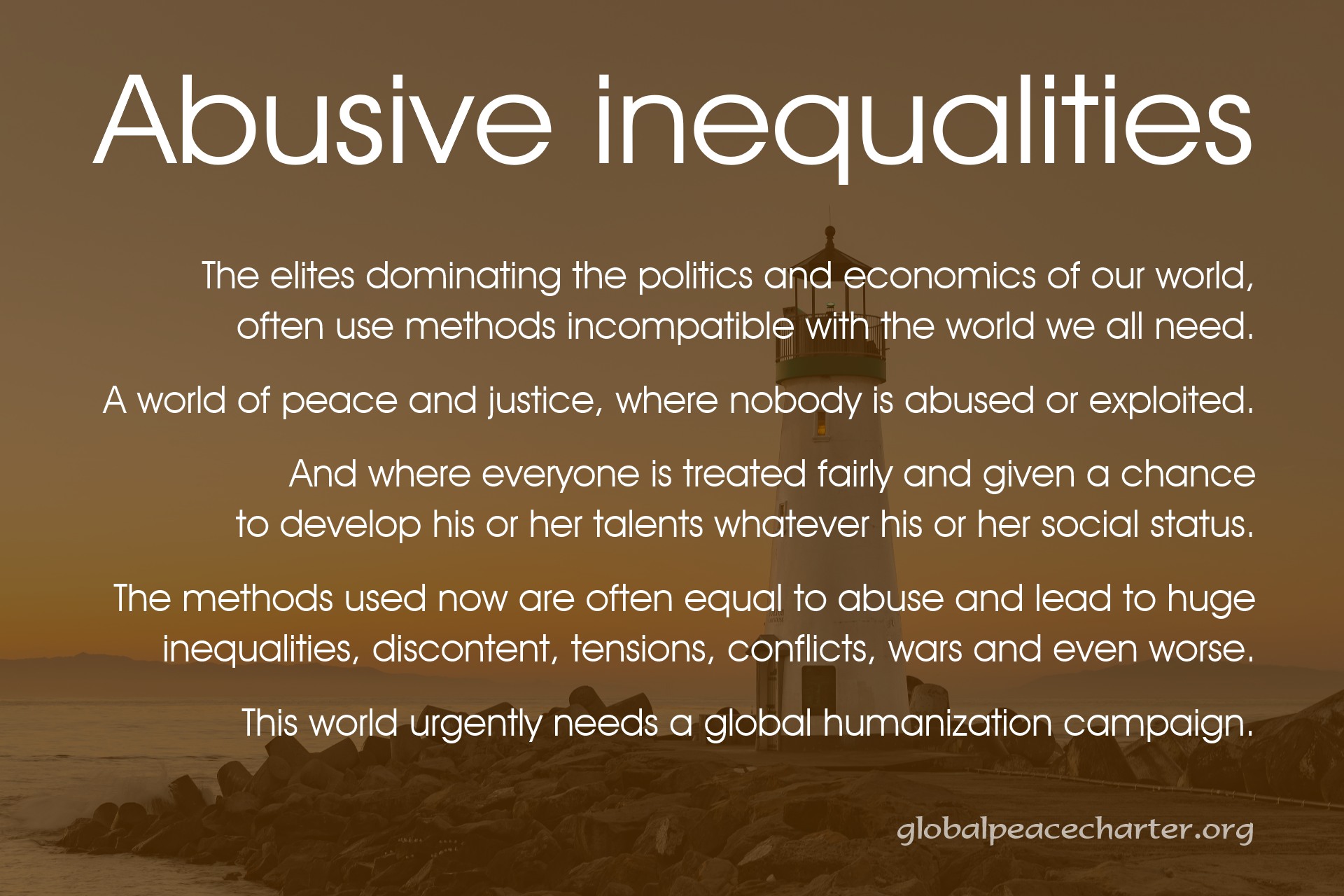